A Tale of Two Doctors

Doctor Who has reached a worldwide popularity that would be hard to quantify even if one was given all of space and time to do so. In England, that popularity has translated into a slate of further adventures for the Doctor and his companions – novel, magazines, comics, and even radio plays are all accepted and accessible additions to the character’s continuity. I find it strange, then, that such canonical expansion has not really gained a foothold here stateside. The comics in particular have gone through three publishers in the last nine years, with IDW recently passing on the license to Titan Comics. Titan came out swinging last week, debuting two new series – one featuring David Tennant’s Tenth Doctor, written by Nick Abadzis with art by Elena Casagande; and Matt Smith’s Eleventh Doctor, written by top 2000 AD talent Al Ewing and Rob Williams with art by Simon Fraser. I skipped the IDW comics when they released, despite the fact that the Eleventh Doctor’s adventures were initially penned by Andy Diggle; in the spirit of the Doctor’s fiftieth anniversary, not to mention a fit of tremendous excitement about the new series debuting next month, I decided not to make the same mistake twice. I wanted to see how these new stories measured up.

DOCTOR WHO: THE TENTH DOCTOR #1

The issue opens with an introduction to Gabriella Gonzalez, our most-likely new companion, working her family’s New York laundry shop in what appears to be the present day when odd events start happening. Gab’s family seems to be haunted – her grandmother believes she sees her dead husband in some kind of torment; her brother-in-law seems to have been visited by the Devil himself; and outside the family’s restaurant, a baby may or may not have been temporarily infected with sores. Thankfully, the good Doctor – still mourning Donna’s recent loss – is on hand, doing his best to tacitly (if not tactfully) locate the source of the strange occurrences. Oh, and it’s also the day before Halloween – or as it’s also known, Dios de los Muertos….

There’s a lot to like in this issue, the first of which is how well Abadzis nails Ten’s voice. The Doctor has a tendency to ramble, to think out loud, and to completely sidetrack himself with his own thoughts. It’s almost eerie how easy it is to hear Tennant’s sweetly manic (manically sweet?) voice when reading the dialogue.

Casagande also nails the likeness effortlessly. In fact, the art is really pretty fantastic as a whole, very fluid and kinetic without being overstuffed or hyper detailed. The pitfall a number of licensed comics fall into is to concentrate on one or two very specific character models to the detriment of the rest of the book; thankfully, that couldn’t be further from the case here. The art has a very clean line that makes good use of colors to keep the eye moving and concentrating on the story.

I’m also a fan of the setting – too often, writers fall back on using London (or England in general) as the point of departure for a Doctor Who adventure, even though he has the whole of Earth – hell, the whole of reality – to play within. Gabby is first generation American, with Latino parents who immigrated into this country and are still tied to the old world in a lot of ways. Unfortunately, that’s where the seams of this issue start to show.

Abadzis lays on Gabby’s situational dissatisfaction with a trowel and mortarpan. She’s a college-age woman who attends night school accounting classes instead of an actual university because she’s helping her father run the Laundromat and waitresses at the family restaurant, and her resentment is so crystalline I’m surprised her dialogue balloons aren’t see-through. Its clear Abadzis wants us to root for Gabby to get with the Doctor and away from this life, but it just comes across as clumsy and heavy handed. Otherwise, it’s a pretty solid first issue – I hope Abadzis can rein in his more histrionic tendencies, though.

DOCTOR WHO: THE ELEVENTH DOCTOR

WE GET TO SEE THE SWIMMING POOL IN THE TARDIS!!!

Sorry. Bit of a nerd moment there.

Alice Obiefune just buried her mother, got served an eviction notice on her flat, and hates her job as a library assistant. So of course, she’s accosted by an emotion eating space dog and the charming young man in the big blue box trying to catch it.

Okay, full disclosure – I am completely in the tank for Al Ewing. His Zombo strips in 2000 AD may be the best comics of the 21st Century, and he and Rob Williams are two of the best Judge Dredd writers whose names are not John Wagner. So I approached this series with a lot less trepidation the one featuring Ten. But even my high expectations were surpassed; storywise, this is a near perfect continuation of Eleven’s adventures post Amy and Rory.

Ewing and Williams dexterously capture The Eleventh Doctor’s empathy, showing us a man who can see his own sadness reflected in others and how assuaging their pain might alleviate his own to some degree. They also give us an absolute romp of an adventure, a done-in-one issue that uniquely introduces our new companion and the Doctor’s state of being. It’s very reminiscent of Martha Jones’ introduction, actually, though even more striking because Alice appears to be an older (or at least more mature) companion than Who fans might be accustomed too.

The art is at once visually striking and a little off-base. I adore the colors in this book – the Kharitite in particular is a sublimely goofy bit of madness, with colors to match his otherworldly design; the opening pages as well are unique in that they are done in gray scale, to reflect Alice’s mood – color is introduced only when the Doctor comes bounding in to save the day. My only real issue is, unlike the issue above, Simon Fraser apparently has no idea how to draw Matt Smith’s face. He walks around the whole comic looking dopey and unfocused. I would think he had a problem with human faces, but Alice is by contrast an incredibly well defined and singular character. Fraser almost makes up for it with the inventive design of the alien species we see, but every cut back to the Doctor is so jarring it almost draws me out of the story.

Oh well. We totally get to see the swimming pool in the TARDIS. 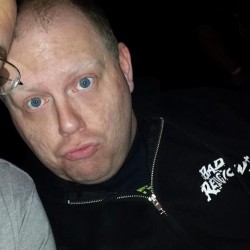